The Prandtl number (Pr) is a dimensionless parameter that puts the viscosity of a fluid in correlation with its thermal conductivity. It shows the relationship between momentum transport (viscous diffusion rate) and thermal transport capacity (thermal diffusion rate) of a fluid. It can be used to compare the performance of heat transfer fluids for a particular application when engineers are considering multiple fluid options. In this article, we explore Prandtl Number (Pr) from theoretical and practical perspectives. 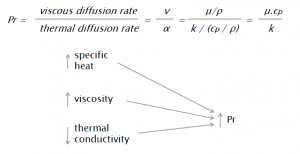 As viscosity increases, Prandtl number (Pr) increases and thus heat conduction capacity of a thermal fluid decreases. When compared to water or air, heat transfer oils have higher Prandtl number (Pr). Therefore, they possess poorer heat transport characteristics comparatively . In other words, the thermal boundary layer has lower thickness relative to velocity boundary layer in this case. However, heat transfer oils have other desirable properties that air, and water do not have, making them a necessity in many industrial applications. Such properties include high temperature capabilities/stability and low pour points/low temperature pumpability. That said, Engineers are often faced with multiple heat transfer fluid choices and the Prandtl Number (Pr) can be used to determine an optimal fluid choice amongst other parameters.

For a given fluid flow scenario, the flow conditions remaining the same, if a higher heat transfer rate is desirable, it is advisable to choose a heat transfer fluid that has a lower Prandtl number. If you have any questions regarding the optimal heat transfer fluid to select for your application, the Thermal Fluid Engineers at Relatherm Heat Transfer Fluids are always ready to help. Give us a call anytime.